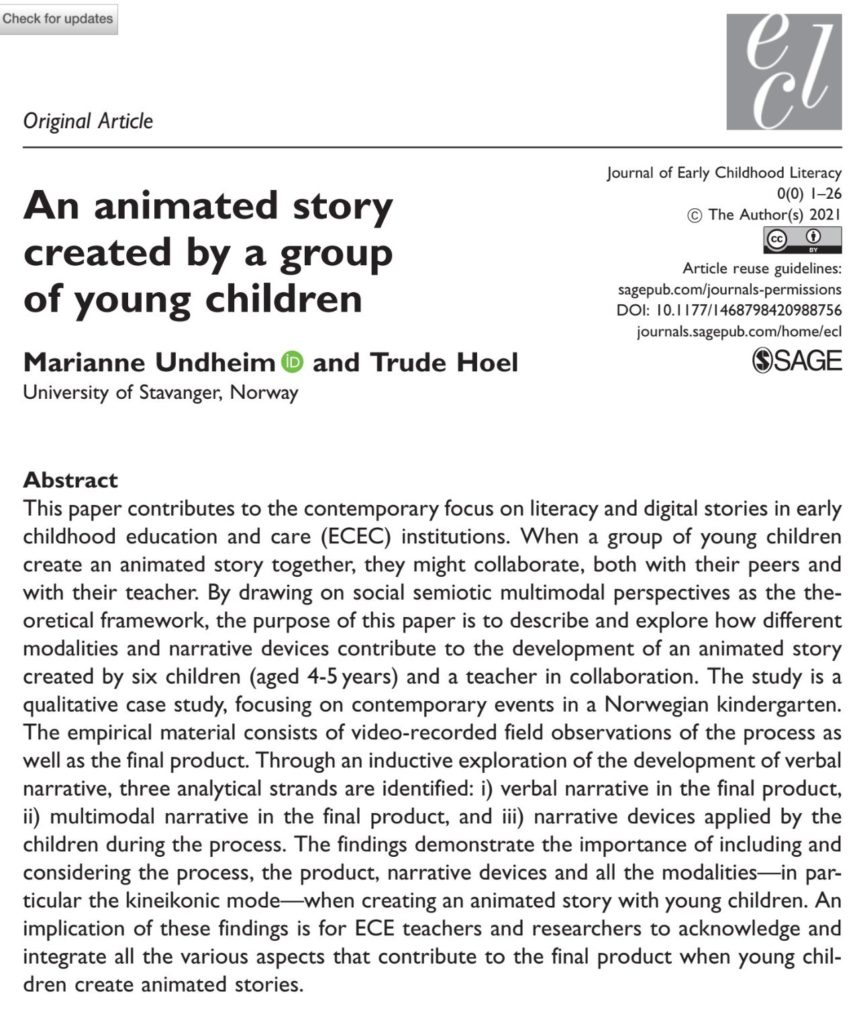 This is the title of an article written together with Trude Hoel. The article is part of my PhD thesis and is published in Journal of Early Childhood Literacy (Click here to read the article).

In the article we explore how different modalities and narrative devices contribute to the deveolopment of an animated story created by six young children (age 4-5 years) and a early childhood teacher.

By drawing on socio-semiotic multimodal perspectives (Kress, 2010; Kress & Jewitt, 2003), the animated movie is analysed. We understand meaning making as a combination of several modalities.

A key feature of an animated movie is the combination of several modalities — such as still images, voice, music, and text. In other words. The story is expressed through several modalities, and we look at all these modalities are equally important.

Another key feature is the sequences of still images that create an illusion of movement, f.ex., a moving Duplo-figure. However, it is not the still images in itself that are of interest — but the movment that is created — the moving images. This is illustrated in the pictures below, of the stepmother going for a walk.

The animated movie created by the children in this study is about pricess Rapunzel who is who is trapped in the castle by her stepmother. The children have used several well-known elements from the fairytale genre, such as, «once upon a time», home-out-home, and repetitions. In the voice over, the children describe what happens in the movie.

The process and product

The article focuses on the process and the final product — from the first idea till the final animated story.

When the children and teacher are recording the narrator voice, the children focus on what is the most important for them at that time — with a «here-and-now» perspective. The analysis shows that several elements included in the animated story are not mentioned by the children, such as Rapunzel standing by the window. The narrator voice only express parts of the story. To understand the whole — it is important to include all the elements — that is, all the modalities. Each single modality contributes to the story in its own way, as shown in the example below.

A central finding in this study is the importance of including the process, the product, the narrative devices and all the modalities in the analysis — they are all important to understand the development of the story.

Another central finding is the importance of keeping ones eyes and ears open for the magic in children’s creative processes. The narrative devices scary and funny were very important for the children throughout the entire process — and was acknowledged by the teacher.

In this article, the findings demonstrate the importance for early childhood teachers and researchers to acknowledge that all aspects are equally important — as bricks in a puzzle — when young children create animated stories. The different aspects contribute in different ways during the creation process — to a final product.

Link to the article

Links to the two other articles in my PhD-thesis:

From 2021 most posts are published in Norwegian and English.

Children and teachers engaging together with digital technology